“"He may not be a millionaire but he sounds a lot like Cash."”

Will Ardell's powerful and immediately recognizable voice is a testament to the expression of art and to yearning in all of all us to be heard above the din of our surroundings.

Born and raised on the prairies of Saskatchewan the beauty and realness of rural life is brought alive in the lyrics in a way only Will Ardell can.

In 2009 Will Ardell released his first music by request, after posting some of his home demos for people to hear. Will had recorded the music on his digital recorder.   He sold 1500 copies from New York to Australia!
By 2010 Will was up and running as a professional musician. Joining the  Southwest Saskatchewan Country Music Tour that year and by 2011 he was off to Nashville to record with the esteemed Steve Rutledge. Will released his first record "All About the Ride" in 2012. A unique two disc Country-Rock album. The albums two videos did extremely well "Save Me", a catchy upbeat love song and "Make Me a Man" a moving lyrical tribute to his late father had combined views of over 550,000 thousand. "Save Me" was Will Ardell's first release to country radio and broke the top 40. Is it any wonder in 2013 he earned the title of 2013 SCMA Rising Star.
In 2014 Will followed up with next record "Reckless" . An album Will Ardell recorded again in Nashville with the help of some talented friends like T.W. Cargile who works with one of Will's musical idol's Jamey Johnson. The record "Reckless" has a more Americana Folk sound to it than his previous recordings, with less of a focus on traditional radio friendly music. The album still did well and continues to impact radio in the UK, Europe and Americana and online radio. "Reckless" also caught the attention of his peers in Saskatchewan and he was once again nominated for several SCMA awards including video of the year for "Ten Thousand Candles".
By the end of the 2015 music year Will Ardell has a total of 15 SCMA nominations, including Male Artist of the year and Folk Artist of the year. Clearly showing the industry acknowledges Will's great talents across the country genre. Will Ardell has been known to rock out "I'm a little tea pot" during sound check to bringing goose bumps and tears to his audiences eyes. One listener was quoted after hearing Will's latest release "His voice is hauntingly beautiful. I don't listen to country any more but I'll listen to Will Ardell. He reminds me of Johnny Cash and Waylon those guys I use to listen to with my Dad!!"
Will Ardell continues to write and record, with a beautiful and moving single released in 2016, "Breakin Fences". He recorded an album of covers at SkullCreek Studios in Saskatchewan along with the single but has yet to release it.

Will finished writing his 4th Record over the last 5 years. Starting in 2020 Ardell began releasing singles off the upcoming record "The Truth". The first single "Beautiful Kind" released in October 2020, with "Wounded Kids" and "Highway to the Sun" both released in the Spring of 2021. All have had solid success on streaming platforms.

“"No matter what your taste is in music, there is no denying Will Ardell’s music is catchy and incredibly uplifting.  I absolutely love Country Music. To me Country music isn’t about just singing a song with a twang, It’s about telling a story from the depths of your soul, drawing people in, wanting more and Will Ardell does that perfectly in each of his songs.  Will has a very powerful, distinct voice. His lyrics are authentic and come from the heart and his own personal life experiences. When you can hear the someones heart in their music, you know you have a winner, and Will Ardell is a definitely a winner."”

“Saskatchewan's Will Ardell is the real deal in Country music. You don't have to listen to him for long before you realize this. He writes and sings with honesty and makes the listener feel what he's feeling. I've enjoyed speaking with Will on my online radio show and playing his songs. I look forward to hearing his new music as I know he is only getting better as an artist and he'll soon be climbing the Country music charts to the top”

“The first time I met Will Ardell was when I presented him with the Rising Star Award at the 2013 SCMA Awards - since that time I have been fortunate to share the stage with him at songwriting circles, write songs with him, and get to know this extremely talented artist and songwriter as a friend. He is the real McCoy - his songs are filled with keen observations about life and love that can bring both tears and smiles, with a vocal delivery straight from the heart - he is an amazing writer, and I'm very excited to have a co-write with him appearing on my upcoming album - if you get a chance to see and hear Will in concert you MUST GO!!!!!!"” 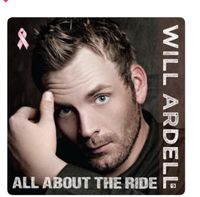